The Height of Every Starting Goalie in the NHL

Gone are the days when goalies were the short, less athletic ones who couldn't skate as well as anyone else on the team. Nowadays, netminders are far more skilled and a whole heck of a lot taller.

If you want to be a goalie in the NHL today, you'll need to be a fantastic skater, agile, and tall (and you might want to have begun personal goalie training lessons starting at about nine years old too).

Goalie heights have definitely grown over the years. Just by looking above at our list of today's starting NHL goalies ordered by height, you can readily see it's a group of fairly big guys.

The Tallest and Shortest NHL Goaltender Are:

The tallest goalie in the NHL today is Ben Bishop of the Dallas Stars, measuring in at a whopping 6'7". (That's a far cry from the older days of the NHL that had goaltenders like John Vanbiesbrouck who was 5'9" or Gump Worsley who was only 5'7".)

The shortest goaltender right now is Casey DeSmith of the Pittsburgh Penguins who is 6'0". 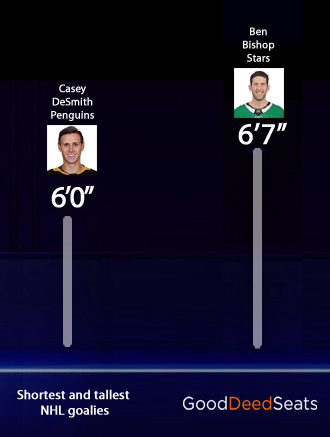 Next in Line for Height

The NHL's next tallest starting goalies today are three 6'6" guys: Adin Hill of the Coyotes, Devan Dubnyk of the Wild and Jacob Markstrom of the Canucks. And after them is the Predators' goaltender Pekka Rinne at 6'5".

Then there are five goalies whose height is 6'4" and another five starters who are 6'3" in the National Hockey League.

The Average Height of a Starting NHL Goalie Is:

If you take all the goalies shown above and average their heights, it comes out to 74.9 inches, or just about 6'3".

So the average height of a starting NHL goalie today is 6'3".

The Most Common Starting NHL Goalie Height Is:

And the most common height for a starting NHL goalie today is 6'2". Eleven NHL teams have starting goalies who are 6'2".

You May Also Like: If you're into fantasty sports like NHL fantasy and need to know player heights, the chart below should do. But if you want to know NFL quarterback heights, go here. And if you want to see who the height of the tallest player is on every NBA team, go here.

Why Did NHL Goalies Get Taller Over the Years?

At the very beginning, the original rules dictated that NHL goalies had to stand up and could not leave their feet or even fall down. Although those rules changed very quickly, the norm of goalies standing upright continued.

It wasn't until later, when masks were required and there had been advances in padding that goalies started stretching, diving, falling and flopping around to stop more pucks from getting in the four-by-six foot goal.

Another factor in goalie height growth over the years is that their gear changed; goaltenders' pads began to get bigger in the 1990's. The bigger the pads, the more of the net was covered. Makes sense, right? Of course the league eventually caught on and put a limit on pad size. To make up for this then, teams started looking for larger-sized goalies.

And finally, NHL goaltender heights increased for another simple and logical reason too: a larger wing-span and leg-span allows goalies to cover more of the goal, especially since they are using the butterfly style of net-minding. The bigger the guy, the fewer the pucks between the pipes.


All data from NHL.com

The Tallest Players on Every NBA Team

The Height of Every NFL Quarterback

The NHL in Pictures and Stories: The Definitive History