The Heights of the Tallest Players on Every NBA Team

Eighty-four.  That's how many inches are in seven feet. While they're the same size, one is definitely more impressive than the other.

Being 84 inches sounds a bit underwhelming—like you're cutting a two-by-four. Being seven feet tall sounds cool—like you're a basketball player.

There are 43 players in the National Basketball Association that are at least seven feet tall. Fourteen of those players are seven-foot-one or taller.

Five teams don't possess a seven-footer, and one, the Boston Celtics, doesn't have a player 6'11" or taller. That doesn't seem to bother the C's. At the time of writing this article, they have the best record in the Eastern Conference.

Of the 25 teams with at least one seven-footer, 12 have two or more and 6 have three (Mavericks, Lakers, Suns, Trail Blazers, Kings, and Raptors).

The two seven-foot tall forwards are Dragan Bender of the Phoenix Suns and Lauri Markkanen of the Chicago Bulls.

The leagues 43 seven-footers represent 24 countries including Austria, Cameroon, Finland, and Tunisia. The countries with the most entrants after the United States is Spain and Croatia (each has two).

The heaviest seven-footer is Boban Marjanovic of the Detroit Pistons.  He's listed at 290 pounds. We find it hard to believe that not a single seven-footer is three bills. Remember, this isn't a list of height but listed heights.

NBA players are usually an inch or two shorter, and 10 to 15 pounds heavier, than what's officially claimed.

Our first NBA player heights list documents each team's tallest player(s).  After that, we list the NBA's 43 seven-footers.

For that rundown, we've organized players by height, and within each height, we've listed the players alphabetically by team. For teams with more than one seven-footer, we listed them alphabetically.

To qualify for our list, a seven-footer needed to appear in at least one NBA game during the current season.

The NBA Teams with the Tallest Players and Heights Are:

The Detroit Pistons have a 7'3" player named Kristaps Porzingis and the other team with a 7'3" player is the New York Knicks with Boban Marjanovic.

The team with the next tallest player is on the Dallas Mavericks named Salah Mejri at 7'2". 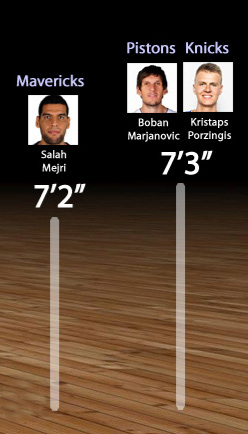 Timofey Mozgov – 7'1"
The Russian is one of 11 players that are listed at seven-foot-one.

Lopez and Markkanen see eye-to-eye, but they are separated by nearly a decade of experience. Lopez entered the league in 2008 and Markkanen is a rookie.

Boban Marjanovic – 7'3"
The Serbian center is tied with Kristaps Porzingis for the NBA's tallest player.

JaVale McGee – 7'0"
Damian Jones – 7'0"
Jones barely makes our list.  He got into one game and played for less than two minutes.

Zhou Qi – 7'1"
Zhou Qi is not the tallest Chinese player to ever make the Rockets roster. The 7'6" Yao Ming played eight seasons for Houston and helped popularize the game in his homeland.

Ivica Zubac – 7'1"
The Lakers other two seven-footers are Andrew Bogut and Brook Lopez.

Marc Gasol – 7'1"
Marc towers over his older sibling, Pau. Big bro is the runt of the family standing at just seven feet.

Hassan Whiteside – 7'0"
Kelly Olynyk – 7'0"
Both Whiteside and Olynyk are averaging double-figures in scoring. Whiteside is putting up 14 a contest while Olynyk adds 10.

Kristaps Porzingis – 7'3"
The 22-year-old, who is tied for being the Association's tallest player, is averaging 23 points a game and pulling down seven boards.

Nikola Vucevic – 7'0"
Playing 30 minutes a game, the Montenegrin center is contributing a solid 17 points and 9 rebounds.

Joel Embiid – 7'0"
The former Kansas Jayhawk might be the best seven-footer in the NBA.  He's averaging 24 points, 11 boards, and 3 assists a game.

Meyers Leonard – 7'1"
At practice, Leonard looks down at his teammates Jusuf Nurkic and Zach Collins. Both are only seven feet tall.

Georgios Papagiannis – 7'1"
It's a good thing that Papagiannis has a seven-foot-one-inch frame. Otherwise, his last name might not fit on the back of his jersey.

Jakob Poeltl – 7'0"
Jonas Valanciunas – 7'0"
Lucas Nogueira – 7'0"
The Raptors three seven-footers all contribute although Nogueira doesn't get a ton of minutes.

Rudy Gobert – 7'1"
Jazz fans have seen taller.  Mark Eaton was 7'4" and played in Salt Lake City in the eighties and early nineties. Twice, he won Defensive Player of the Year honors.

Jason Smith – 7'0"
The Wizards are famous for height. The two tallest NBA players of all-time, Manute Bol and Gheorghe Muresan, both played for Washington. Each man was listed at 7'7".

The Seven-Foot+ Tall NBA Players Are:

Data courtesy of the NBA.com and accurate on 1-6-2018. (Since this article was written during the 2017-2018 season, some players could now be on different teams or out of the league.)

The Height of Every NFL Quarterback