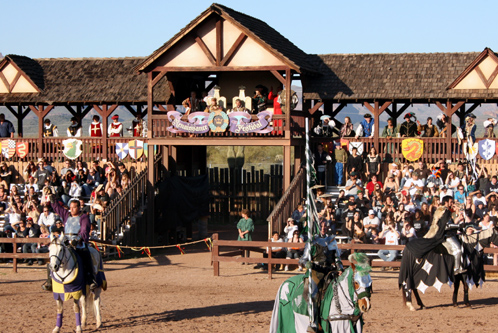 Do you want to go back in time?

If your answer is “yes,” you have two options.

Your first option is to master time, space, and relatively and build a time machine.

Your second option is to attend the Arizona Renaissance Festival.

The Arizona Renaissance Festival will whisk you back to a time where chivalry wasn't dead, and the most popular sport was played with a lance.

The festival is held every Saturday and Sunday from Feb. 10 to April 1, as well as Presidents' Day.

egardless of the weather, festivities begin at 10am and end at 6pm.

The Arizona Renaissance Festival began in 1989 and welcomes about a quarter of a million visitors every year. Festival grounds span 30-acres and contain 13 stages.

Visitors can enjoy 200 unique artisan shops, games, jousting, performances, and rides. The festival serves delicious food, delectable desserts, and refreshing beverages. And yes, you can get a large turkey leg.

If you're coming from Phoenix, use the Superstition Freeway.

The festival is located past the Gold Canyon Golf Resort.

If you're coming from Tucson, take the Pinal Pioneer Parkway to the Florence Junction. Then travel west for seven miles on U.S. Highway 60. 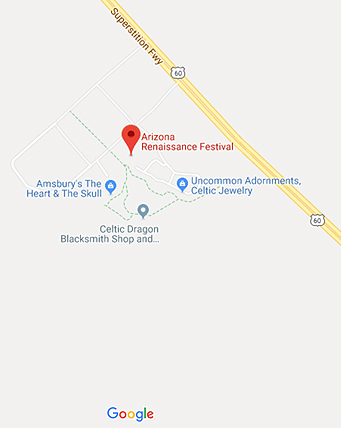 Get Directions with Google Maps

Before beginning your journey, you may want to consult the festival's website for detailed directions.

The festival does offer free parking. Also, leave Fido and Fluffy at home. Pets are not allowed.

If you're looking to make a weekend of the festival, the Gold Canyon Golf Resort is just a couple of miles from the festival grounds.

The resort has 85 rooms and all the amenities you'll want after a long day of Renaissance-ing. 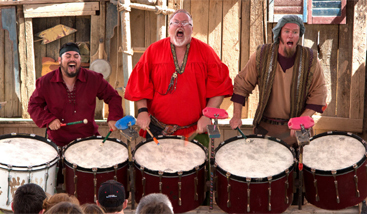 Live music is a major attraction at the festival. This includes everything you'd expect at a Renaissance festival from wandering minstrels to folk dancing.

One of the most interesting musical acts is Cast in Bronze.

In fact, it's one of the most interesting musical acts in the world.

Cast in Bronze plays a carillon or a huge set of bells. This unique instrument was invented about 500 years ago in Northern Europe.

The 35 bells that make up Cast in Bronze's carillon weigh four tons and are played with a modified keyboard. Playing the keyboard is the mysterious and masked, Spirit of The Bells.

He doesn't tickle the ivories but strikes the them with his fists and feet.

Cast in Bronze has been invited to play for the Pope and the president.

Besides music, attendees can also enjoy acrobats, jugglers, and hilarious comedy acts. These performers will delight and dazzle knights and ladies of all ages.

We know what you're asking, “Does he use a flaming whip?”  He certainly does. 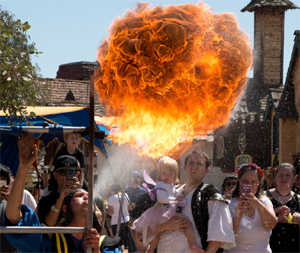 In between performances, partake in an exciting assortment of rides and games. As for the games, there's paintball, target shooting, and a climbing tower.

Thrice daily, attendees can enjoy the “original sport of kings,” jousting. Each joust is unique, authentic, and thoroughly enjoyable. After the final joust, combatants recreate a Renaissance-style fight to the death. 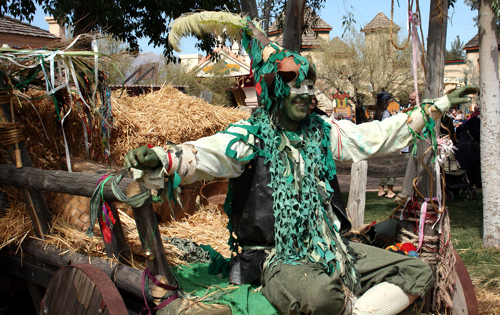 The Pleasure Feast occurs twice a day at noon and 2:30pm. This Renaissance inspired-feast is a five-course meal replete with outrageous entertainment (which may not be suitable for young audiences).

At this feast, you'll be treated like royalty and served by wenches and knaves. You'll also receive a souvenir goblet.

To attend, you'll need to procure tickets. Seats are assigned, so let organizers know if you wish to be seated with a large group.

The Arizona Renaissance Festival is a great place to tie the knot. Organizers offer several wedding packages include the Sir Lancelot, Queen's Reception, and King's Pavilion.

One of the available options is having costumed entertainers escort your wedding party to the Joust Arena. How cool is that?

10am to 6pm
Rain or Shine
Free Parking!