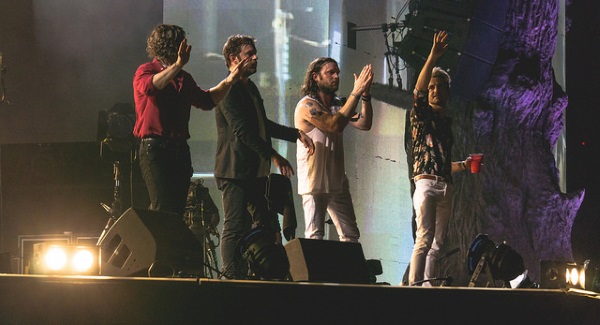 They initially launched their global odyssey at the end of April.  Over the spring and summer, the band visited cities in North America as well as Europe and the United Kingdom.

Their final leg kicks off in Charlotte at the PNC Music Pavilion.  It ends Oct. 28 in Tampa at the MidFlorida Credit Union Amphitheatre.

The band has also routed some stops in Canada.  During the first half of October they’ll be in Vancouver, Edmonton, Calgary, and Winnipeg.

The band is touring to support their seventh studio album, WALLS.  The opus dropped in October of 2016.  WALLS, which apparently stands for “we all like love songs,” was well received by critics and peaked at number one on the Billboard 200.

You’ll definitely see me at a Kings of Leon concert.  They are one of my all-time favorite bands and one of my top three 21st century artists.

Yet, I’m probably the only Kings of Leon ticket holder that won’t mind if they only play tracks from their first three albums: Youth & Young Manhood, Aha Shake Heartbreak, and Because of the Times.

I understand this makes me sound like a pretentious windbag.  Those are the three albums KOL released before hitting it big with 2008’s Only by the Night.

Interestingly, while Only by the Night is the band’s bestselling studio effort, WALLS is their only offering to go all the way to the top spot on the Billboard 200.  Come Around Sundown and Mechanical Bull both stalled at the penultimate position.

Don’t get me wrong, Kings of Leon has produced a lot of great music from Only by the Night going forward: “Sex on Fire,” “Notion,” “Pyro,” “Supersoaker,” “Wait for Me,” “Waste a Moment,” “Reverend,” and the Grammy Award winning “Use Somebody.”

It’s just that the band’s early work had a passion, a rawness, and an energy that their later stuff doesn’t have.  Conversely, their last four albums have a maturity, a polish, and a sophistication that their first three oeuvres lacked.

Still, this is rock and roll.  It’s a genre that’s not always served by maturity, polish, and sophistication.

I remember reading a Rolling Stone article about the song “Layla.”  The author said it was one of those rare songs where the performer, in this case Eric Clapton, wasn’t just singing a song, but singing as if his life depended on it.

Sure, a little dramatic, but the description has always stuck with me.  In several early Kings of Leon songs, front man Caleb Followill sounds like he’s singing for his life.

KOL’s oldest material has such an energy that it feels like the studio’s recording equipment is being pushed to the edge of effectiveness.  It’s as if the band’s music is about to burst through your speakers because their sound can’t be contained.

“Molly’s Chambers,” “Holly Roller Novocaine,” “King of The Rodeo,” “Four Kicks,” “Charmer,” and “McFearless” are the kind of songs that are too raucous for many of their current fans.  That, of course, is what makes them so good.

“Black Thumbnail,” from Because of the Times, is my personal anthem.  How can you not love a song that begins:

My cold, cold, stellar heart says get on your way

I aint to proud to say but thats how I’m made.

I’ll be that person ’til my dying day

I try so awful hard, but I can’t change.

Kings of Leon did change.

I’m not saying they changed for the worse, nor am I’m saying they should have kept remaking Aha Shake Heartbreak over and over again.  The fact that their music has matured and evolved is a big kudos to them.

All I’m saying is I wish they could have kept some of the energy they had in the beginning.

Their latest release, WALLS, combines their musical maturity with the raw emotion they exhibited in albums one, two, and three.  Still, the album contains no “California Waiting” or “Razz.”

It’s nothing new for a band to alter their sound.  All the giants of rock changed over the years.  Their final albums sound much different than their first—The Beatles, Rolling Stones, The Who, Pink Floyd, U2.

For a few of the previously listed bands, their change in sound was not only due to artistic innovations but advances in technology.

The only gigantic band that I’d say didn’t drastically change their sound was Led Zeppelin.

>>Fleetwood Mac began life as a blues band. Less than a decade later, they released Rumours—the epitome of the California rock sound of the 1970s and about as far away from the blues as you can get while still plucking guitars and banging drums.

>>Staying with seventies rock bands, the Eagles started out as a sleepy country rock/soft rock outfit that progressively evolved toward a more edgier sound. Their musical morphing was solidified in 1975 when the band took guitarist Joe Walsh under their wing.

>>Eddie Van Halen and Alex Van Halen have certainly given their band, Van Halen, consistency. They gave their fans whiplash, however, when they went from David Lee Roth and the album 1984 to Sammy Hagar and the album 5150 in less than two years.

Fleetwood Mac, Eagles, and Van Halen were more about adopting, or transforming, into a new, or somewhat new, sound.  Kings of Leon is different because they changed their energy.

A band that relied heavily on energy was the only band that ever mattered, The Clash.  Their energy only waned when half the band was fired.

They didn’t last long once their vibe was amended.  They released one album and disbanded shortly thereafter.

KOL started out as an energetic and dynamic southern rock/garage band.  They are now a polished adult alternative brand.

There’s nothing wrong with that.  It’s just different.