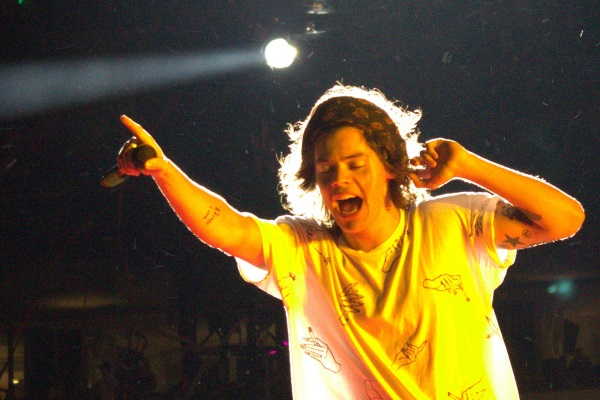 Harry Styles: Live on Tour begins in September.  The singer is hitting the road to support his self-titled debut album.  Both are firsts for Harry Styles as a solo performer.

Styles begins his tour Sept. 19 in San Francisco at The Masonic.  Over the next two months, he has 14 gigs planned, including concerts in New York City on Sept. 28, Boston on Sept. 30, and Atlanta on Oct. 8.

How’s he doing on his own, away from One Direction?  The answer is pretty good.

Styles’ album debuted at number one in both the U.S. and the U.K.  His debut single, “Sign of the Times,” went all the way to number one in the Queen’s realm and number four in the United States.

Also in 2017, the English singer made his acting debut in Dunkirk and appeared as the musical guest on Saturday Night Live.

Harry Styles’ success got us thinking about other debuts of artists previously in popular bands.  Below are ten singers/musicians and their first solo albums.

To make the list more interesting, we’ve excluded members of classic rock bands from the 1960s (The Beatles, Rolling Stones, Led Zeppelin, The Who).  We’ve also excluded artists whose full names are in their bands’ appellations (Tom Petty and the Heartbreakers, Bruce Springsteen and the E Street Band, Dave Matthews Band).

Beyoncé knows how to make a debut.  Dangerously in Love dropped in June of 2003.  It went on to sell 11 million copies and capture five Grammy Awards.  The album produced two number one singles, “Crazy in Love” and “Baby Boy.”  Needless to say, Beyoncé’s debut was better than the debuts of the other two members of Destiny’s Child… put together… and multiplied by four.

The Black Eyed Peas went on hiatus from 2007 through 2009.  Right before that, in September of 2006, Fergie released her debut studio album, The Dutchess.  Critics were lukewarm over the release, but the album sold like it was going out of style.  Her collection debuted at number two and amassed nine million in sales.  The Dutchess was responsible for three number one singles and two more that peaked inside the top five.

Freddie Mercury is one of the greatest frontman in rock history.  His work with Queen made him a legend.  In 1985, he issued his debut solo album, Mr. Bad Guy.  The album took two years to make and is a sonic departure from Queen’s iconic rock din.  The album peaked at six in the United Kingdom but stalled at 159 in the United States.  Still, Mr. Bad Guy was a solid effort and dedicated to cat lovers.

Wham! released their last single in 1986.  George Michael released his first solo album, Faith, in 1987.  The album contained nine songs, seven of which were released as singles.  Faith moved 20 million copies and took the Grammy Award for Album of the Year.  It was also the first album by a white dude to reach the top of the R&B/Hip-Hop Albums chart.  Rolling Stone magazine ranked it as one of the 500 greatest albums of all-time.

Gwen.  Stefani.  Released.  Love.  Angel.  Music.  Baby.  In.  2004.  See what we did there?  After five albums with No Doubt, Stefani decided to make one all by herself.  It was a good decision.  Her inaugural LP sold seven million copies and garnered six Grammy Awards.  Stefani was not going to tour, but L.A.M.B. was so popular she had to route some dates.  Her tour spanned 37 shows and grossed $22 million.

Jack White has done so much in the music industry, and is so prolific, it’s hard to believe that he didn’t release his first solo studio album until 2012.  Blunderbuss debuted at number one and picked up Grammy nods for Album of the Year and Best Rock Album.

This might be hard to believe, but this coming November, Justin Timberlake’s debut album, Justified, turns 15 years old.  The album dropped on Nov. 5, 2002 and contains contributions from several big-time producers including Brian McKnight, Timbaland, Scott Storch, and The Neptunes.  Justified has sold more than ten million albums and was nominated for four Grammy Awards.  Amazingly, it was written and recorded in six weeks.

Robbie Williams – Life Thru a Lens

Robbie Williams was in the successful pop group, Take That.  After not getting along with his bandmates, or management, he took his microphone and went home.  Actually, he went to a different studio and recorded his debut opus.  Life Thru a Lens hit streets in 1997.   It struggled until Williams released “Angels.”  The crooner hasn’t had much success in the U.S., but in the U.K., ten of his eleven studio albums reached number one.

Slash is the only entry on our list that doesn’t sing.  His debut studio release hit store shelves in March of 2010.  The oeuvre was produced by Eric Valentine, Kid Rock, and Big Chris Flores.  It contains vocal contributions from successful solo artists who were also in successful bands: Ozzy Osbourne, Iggy Pop, Chris Cornell, and Fergie.  Like most albums in 2010, Slash’s platter didn’t sell a bunch of copies.  It was, however, popular enough to peak at number three on the Billboard 200.

Sting – The Dream of the Blue Turtles

Two years after The Police released Synchronicity, and one year after the band split, Sting released his first solo album, The Dream of the Blue Turtles.  Unusual for a British artist, the album did better on the U.S. charts than it did on the U.K. charts.  It peaked at number two in America and number three in the United Kingdom.  The opus did pick up three Grammy nominations including one for Album of the Year.