The rush must have been overwhelming.

You’re standing in a sea of people. It’s hot, uncomfortable, and the bathroom is a million miles away.

The stage is full of some of the world’s greatest musicians. For the next several hours, these guitar players, keyboardists, and drummers will flex their improvisation skills while performing a catalog of beloved songs.

Yet, the rush was far more complex than the usual adrenaline produced at a rock show. Being at this event, whether in the pit or up in the stands, must have gotten one ruminating on the immense musical and cultural significance of this collection of musicians.

It’s staggering what they mean to their fans and to the annuals of popular music.

This concert video, captured on June 27, 2015 at Levi Stadium in Santa Clara, the first of five farewell performances, featured three of the founding members of the Grateful Dead, Bob Weir, Phil Lesh, and Bill Kreutzmann, as well as Mickey Hart, who joined the band in 1967.

The four hadn’t performed together since 2009.

They were joined at this show, as well as at the other four, by Trey Anastasio, Bruce Hornsby, and Jeff Chimenti.

The concert series was called “Fare Thee Well: Celebrating 50 Years of the Grateful Dead.” It was a celebration of their music and legacy.

With the sun slowly dipping below the horizon, and without fanfare or introduction, the septet nonchalantly began a jam.  That jam eventually turned into “Truckin’.” 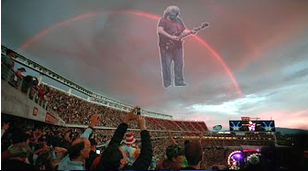 Over the course of their five-concert series, the Dead played 81 different songs.

They only repeated four songs, the aforementioned “Truckin’,” “Cumberland Blues” (which they also played on June 27), “Drums,” and “Space.”

The concert had lights and huge video monitors flaking the stage.  There were some production values throw in, but nothing like you’d find at a typical rock show.

All the accoutrements that usually go with a concert of this size were abandoned for the sake of fidelity. The music was front and center.

As it should be.

You attend a Grateful Dead concert for the jams and to watch people. You’re not there for pyrotechnics and stage effects.

The original members of the Dead were sharp. Yes, they’ve lost a step musically, but their passion was definitely there.

As for the three “guests,” Anastasio was the most prominent. He traded licks with the surviving members like he had been jamming with them for decades.

Speaking of trading, one of the most enjoyable aspects of the performance was watching the musicians play conductors. There’s a lot of signaling that goes on during jams that isn’t apparent on audio recordings or can’t be seen unless you’re close to the stage.

That’s probably the only area where the video exceeds the actual experience of being there with 50,000 of your best friends. That’s not a criticism, but an unfortunate truth.

There’s no way any facsimile of a Grateful Dead performance can do the live event justice.

Sure, there’s no line to the bathroom while you’re watching he video, but the palatable thrill of the concert just isn’t present. 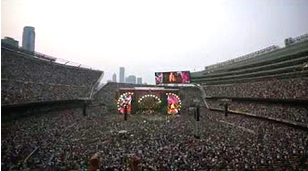 Nonetheless, the video is more than worth your time.

The audio is clear, the photography sharp, and there’s enough shots of the crowd to give you a taste of the atmosphere—that includes several moments with basketball legend, and famous Deadhead, Bill Walton.

Early in the performance, there’s a cutaway to a middle-aged woman dancing spastically to the music, although she’s nowhere close to being on rhythm.

If you didn’t know she was at a Grateful Dead concert, you’d swear she was having a seizure.

The only thing funnier than that hippie’s dance was Bob Weir’s outfit.  He wore a plain, black t-shirt; nondescript shorts; and Birkenstocks. Thanks for dressing up Bob.

Another interesting aspect of this concert video was a young woman sitting on an equipment box in the backstage area.

At the beginning of the concert, during certain shots of the bands, she can be seen smiling, enjoying the music, and taking photographs with her phone.

Although the smartphone is an anachronism, a similar young woman has been backstage at every Grateful Dead show for the past half century.

Her presence perfectly fit the mood of the performance. Even at 50, the Grateful Dead possess a youthful quality. They’re old, their songs are old, but their magic is still fresh and exciting.

As stated before, the band played two sets. In between, there’s a long intermission. It’s filled with a collage of images and accompanied by a psychedelic soundscapes.

Then there are long wide shots of an empty stage. 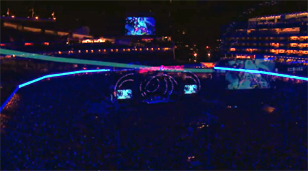 While many fans, major publications, and even this article, referred to this event as a “Grateful Dead concert”—with Anastasio, Hornsby, and Chimenti filling in for Jerry Garcia and Ron “Pigpen” McKernan, officially, it was not a Grateful Dead concert.

According to what was printed on tickets to the concert, and Bob Weir, this was not a Grateful Dead show. In fact, those sources never even named the band.

Despite no official nomenclature, this five-concert series was billed as the last time the surviving members of the Grateful Dead would play together.

Many fans were chaffed when months later, three of the main members—Weir, Hart, and Kreutzmann, along with Chimenti—were joined by John Mayer and Oteil Burbridge for a project called Dead & Company.

That group launched a tour that some considered a betrayal to the finality of the “Fare Thee Well” celebration.

Putting that issue aside, Fare Thee Well: Celebrating 50 Years of the Grateful Dead concert video is must-viewing for Deadheads, fans of jam bands, and baby boomers.

The video will either jog your memory of being there, or make you wish that you were. Of course, the best thing about the concert footage is the music. It’s pretty great.

Shop for Dead and Company Tickets